Menu
The school currently has spaces in Years 3, 4 and 5 and for Year 3 in September 2021 Please contact South Glos Admissions department if you are interested in joining or school...Our COVID - 19 Contact section can be found in 'Our Office'. Please check regularly for any updates. We will text if there is any urgent information is posted.
Report an Issue P
Like Us I
Log in

Welcome to the 5NH class page!

Hello and welcome to our class page. Here you will find regular updates of what has been happening in school, from photos and videos of us taking part in activities to audio clips of us reading our work.

We hope you enjoy reading, watching and listening to all that we have been doing and please visit us again soon to follow our learning journey throughout the year.

If you would like to get in touch with us, we'd love to hear from you. Tell us what you think of our class page and let us know if you have any suggestions.

For the final three weeks of term, we will be reading and studying the haunting poem, The Highwayman by Alfred Noyes and illustrated beautifully by Charles Keeping.

We have been using chalk and charcoal to re-create Charles Keeping's haunting illustrations for The Highwayman. First we chose an image to draw using charcoal and then we used chalk to create a reversed version of the same picture.

We read verses VII and VIII of The Highwayman and created freeze frames for some of the lines.

They said no word to the landlord. They drank his ale instead.

But they gagged his daughter, and bound her, to the foot of her narrow bed.

Two of them knelt at her casement, with muskets at their side!

Have you ever seen anyone solve multiplication and division sums with decimals as quickly as this?

During the first half of Term 6, our topic will be based on the highly-acclaimed, thought-provoking and beautifully-illustrated picture book, ‘The Lost Thing’, by Shaun Tan. As well as thinking deeply about the text, we will be studying the award-winning short film adaptation and creating an artistic masterpiece!

We created our own 'Lost Things' using plasticine and then used iMotionHD to create a short animation. We now know how the Aardman team feels spending so long to create just a short amount of animation!

On Friday 20th June, St. Stephen’s Junior School held every child’s favourite event - Sports Day! It was the perfect day. The sun was shining, there were no clouds in the sky and we even had to bring sun cream.

At one o’clock, all of the children in Year 5 and 6 gathered in their houses and were split into two groups. It seemed like all the children had fun at the inclusive activities: Cups and Domes, Skipping, The Water Challenge, Slalom and The Tennis Racket Relay. Cossham 2 especially enjoyed all of the activities. After the inclusive races ended, it was time for the competitive races: Shot Put, Relay, 60m sprint, Hurdles and Standing Jump.

The 60m Sprint finalists were: Monell Welisane, Summer Edwards and Amie-Joy Feddis but the winner was Monell.

The Shot Put Year 5 girls winner was Monell Welisane once again! She beat Ella Mae and someone else from 5AG. They all threw really well but Monell won with an astonishing 11.3m throw.

From 5NH the boys weren’t bad either. Daniel Cahill won the 60m sprint and Kyell Lindsay-Gottshalk won the 60m hurdles. The most medals were collected by Monell

Overall, everyone had great fun. A big well done to everyone who took part and an even bigger one for Miss Martin for organising this wonderful day!

We all chose a Lost Thing from Sean Tan's 'Utopia' scene and carefully drew and coloured them using chalks and pastels. These are going to make a great display!

After reading The Lost Thing, we wrote our own quest stories to make a class book. You can find a sample of them below.

Our first week reading The Lost Thing has already resulted in lots of great work and some thought-provoking discussions. In order to familiarise ourselves with the text, we learnt a small section off-by-heart and used it to perform Reader's Theatres. This is when you memorise a section and perform it in an interesting way with actions and different expressions. Take a look at our Reader's Theatres below!

To celebrate working so hard this term on our Writing Powers, we held a Super Hero party. Check us out! 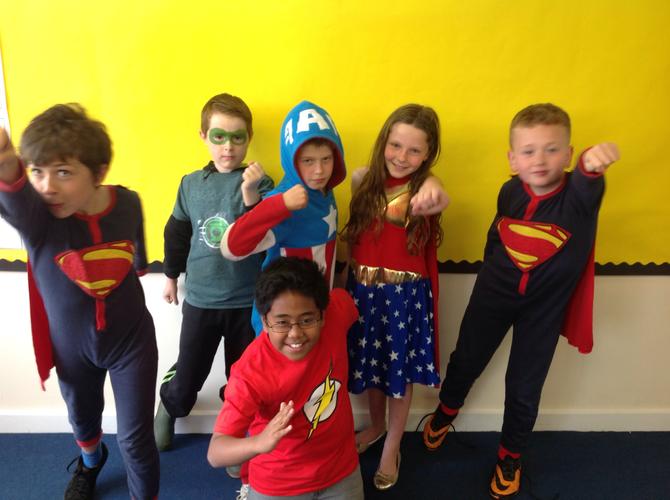 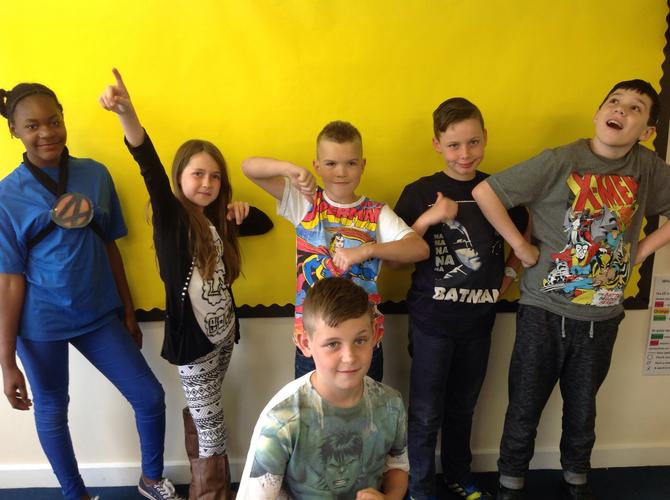 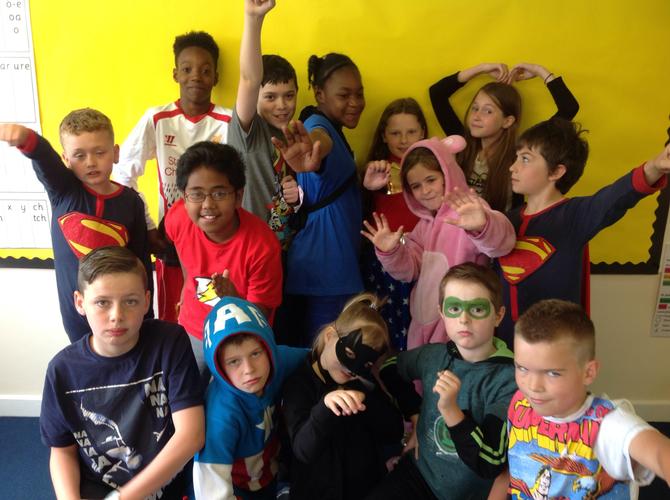 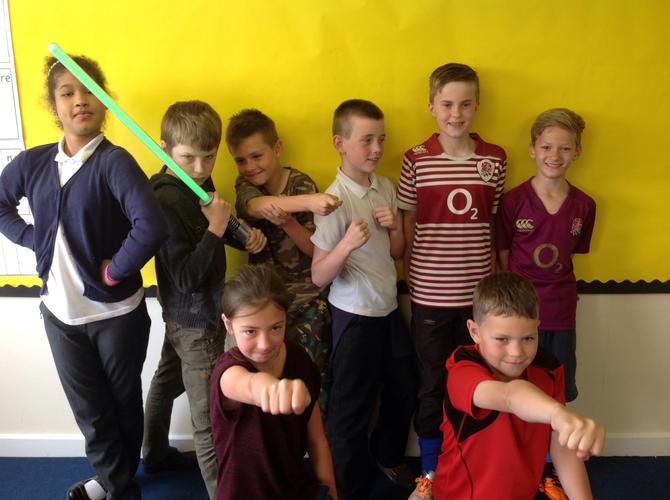 As Term 5 was about us perfecting our writing super powers for Super Hero Academy, we spent some time reflecting on our writing. We thought about what we have enjoyed, where we have improved and our future areas for development.

'This term I have enjoyed writing about Macbeth and the three witches. I have got better at using a range of connectives like however, therefore and although. I need to work on using exclamation and question marks instead of full stops all the time.' Nethan

'This term I have enjoyed writing about Shakespearean actors because I liked researching. I am better at using complex sentences to add extra information but I need to work on using commas to mark clauses.' Megan

'This term I have enjoyed reading Twelfth Night because it's a comedy and love story. I have got better at writing rhetorical questions. I still need to make sure my sentences always make sense.' Tom

'This term I have enjoyed watching and writing about Dug's Special Mission. I have got better at using paragraphs. I need to work on developing my ideas in detail.' Amber

'This term I have enjoyed enjoyed writing Shakespeare's biography because I learnt a lot about Shakespeare that I didn't know. I have got better at manipulating clauses in complex sentences but I need to work on using tenses correctly.' Tyler

'This term I have enjoyed having a Free Write because you get to write what you want. I have got better at using apostrophes. I need to work on putting my full stops in the right places.'  Riley M

This afternoon, we re-enacted the battle scene from the beginning of Macbeth. We rehearsed a sequence of high, middle and low actions and then turned these into a full-blown battle.

This term we are polishing our cricket skills. How's that?!

This term we are studying Shakespeare's Macbeth. To understand Macbeth's thoughts when faced with the decision to murder or not to murder King Duncan, we formed some 'conscience alleys'. Some of us whispered reasons why we should kill the King, while others whispered arguments against killing the King. Afterwards, we had to decide what Macbeth should do.

In maths, we have been scratching our heads trying to solve some very tricky fraction, decimal and percentage puzzles.

Year 5 spent a week learning about climate change. We carried out research, produced information posters and made news reports about global warming.

To celebrate the start of Spring, we used the colours of daffodils to paint our own Spring art work.

This term our class assembly was about the Hindu festival of Holi. Some of us prepared a traditional celebration dance. Apologies for the lack of sound but we're sure the dance moves speak for themselves!

The Power of Reading - Floodland

During Term 4 we read Floodland by Marcus Sedgwick. As well as inspiring lots of excellent writing, it also inspired some great art work and drama.

Our Thoughts on Floodland

'My favourite part of our Floodland topic was the art that we did, especially the waves. I also liked the book because it makes me want to go on an adventure.' Jem

'My favourite part of Floodland was writing our own narratives and drawing Spat's lair.' Max

'I liked all of it but especially the part when the battle started between the different gangs. That was a good chapter!' Jayln

'I enjoyed every aspect! It was about adventure, love, friendship and violence.' William

'I liked the adventures in Floodland because it was set around Norwich. I also liked making our own Floodland maps.' Tom

'My favourite part was the battle between the Eels, Horses and Cats because there was lots going on. I also liked the storm scene because it sounded dangerous.' Dan

'I liked all of Floodland but especially the battle. You don't want it to stop because it is so dramatic.' Tyler

'My favourite part of the term was when we painted waves because I was good at it and it was a lot of fun!' Riley M

'I enjoyed the whole story because it is a really good one which I think people would love to read.' Kodie

'It is excellent because it is about a girl called Zoe, who got stranded on Eels Island and her mission is to find her parents.' Anon

'My favourite part of Floodland is when the Eels fight the Horses and surrounded the Cats because it is surprising and has lots of action.' Riley F

Lots of us liked the ending, but we don't want to give too much away in case you read it yourself!

In Mr Hallows' maths group, we have been solving lots of perplexing problems and puzzles!

Unfortunately not the ones with chocolate chips.

Some cookies are necessary in order to make this website function correctly. These are set by default and whilst you can block or delete them by changing your browser settings, some functionality such as being able to log in to the website will not work if you do this. The necessary cookies set on this website are as follows:

Cookies that are not necessary to make the website work, but which enable additional functionality, can also be set. By default these cookies are disabled, but you can choose to enable them below: